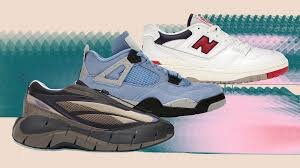 Since they jumped onto the sneaker scene in 2015, Yeezy sneakers have been hard to come by. If you don’t get in quick on those launches, you’re set to miss out–or pay big bucks to get your favorite styles and colorways.

By keeping the supply limited, Kanye West and Adidas couldn’t have been savvier. That’s at least in part why the brand is so covetable. However, it seems that’s about to change, with 2021 promising a ton of launc

Read on to find out what Yeezys you need on your feet this year and when they’re set to hit the stores.

Snaps of Kanye West sporting a pair of Adidas Yeezy 450s were floating around the internet as far back as early 2020. He wore them at the Yeezy Season 8 Paris Fashion Week show. But the kicks themselves weren’t released until March of this year.

The Yeezy 450 definitely inspires a case of love ‘em or hate ‘em among even the most dedicated fans of Yeezy sneakers for women and men. Most people spend their time scratching their heads thinking about what to wear with them, while others see it as a challenge to their creativity. No matter which side you fall on, these kicks deserve a spot for their scarcity alone.

The Yeezy 450 “Cloud White” is an utterly unique design developed in collaboration with Steve Smith. The wild molded foam soal, which acts as an exoskeleton to protect the mesh upper. The construction looks complicated, but it’s actually just a simple, two-piece shoe.

Looking for something Yeezy to rock your autumn?

You’re in luck because the Yeezy DSRT BT (once called the Desert Boot) is set to return this year in not one but two new colorways. “Oil” and “Rock” aptly take their inspiration from military wear–some of Kanye’s favorite shades. And we haven’t seen a double colorway release since way back in September 2019.

Best of all… they’re boots. We all know how few boots Kanye has released in the Yeezy sneakers collections to date. So don’t miss this much anticipated restock; these boots won’t last long.

Except upper panels crafted from suede and nubuck contrasted with breathable padded mesh surrounds. Rope laces and a chunky sole add to the military feel. The Adidas logo appears on the underside of the shoe.

Look out for these boots releasing in August (“Rock”) and October (“Oil”) of this year.

Are you looking out for some softer Yeezy sneakers for men? Then keep a close eye out for the Yeezy 500 “Blush” restock coming at the end of this year. This versatile sneaker just got even easier on the eye with this monochromatic colorway.

Trust us, you’ll want to wear this pair with anything and everything!

In fact, proper sneaker fanatics will know “Blush” already. The colorway first dropped way back in February 2018, but it was called “Desert Rat” instead. And here’s a bit of trivia for you: it was actually the first-ever Yeezy 500 released.

The shoe features a suede overlay and a mesh underlay with a balloon-like sole. Look out for these sneakers releasing (or, more accurately, re-releasing) in November of this year. It’s likely to be a limited public release, so get your pre-orders in quick.

Anyone around in the early days of Yeezy will remember the Yeezy Boost 700 “Wave Runner.” Well, guess what? These coveted kicks returned in August this year!

If it weren’t for fans demanding a restock for the past two years, it might never have happened. So thanks to y’all for helping us real-deal sneakerheads out.

But what makes the Yeezy Boost 700 “Wave Runner” so special? Aside from the famous Boost cushion and reflective stripes, the colorway is magic. Bright orange panels and neon laces contrast dramatically with the black, white, and grey tones on the rest of the shoe.

These sneakers are likely to become classics one day, so don’t miss this chance to add an essential to your collection. The “Wave Runner” is an excellent option if you’re looking for Yeezy sneakers for kids, too.

Are you tired of hearing about new Yeezy sneakers? Well, you’re in luck. 2021 brings us a bunch of new Yeezy slides to go wild over.

These slides are crafted from an injected EVA foam which makes for an ultra-soft walking experience. And don’t worry, you won’t slip in these, no matter where you wear them. They’ve got a signature serrated sole for better traction.

To date, the colorways for Yeezy slides have been a bit boring–but what more do you want from a casual, comfy pair of shoes. At least they still look cool with the Three Stripes logo on the footbed.

Look out for these slides releasing in September (“Soot”) and November (“Pure”) of this year.

If you’re looking for black Yeezy sneakers, these ain’t it. They are, however, just as versatile. You might have heard them compared to Crocs, but we say that’s an unfair (if not downright insulting) comparison.

The Yeezy Foam Runner “Sand” features a single-piece, futuristic foam upper with oval cut-outs for ultimate breathability on those hot summer or early fall days. Best of all, they’re great for the planet because they’re made of harvested algae–mixed, of course, with Adidas’ own-formula EVA.

These sneakers are weird, alright. But in the very best, undeniably coolest way. And “Sand” stays true to the neutral color palette the brand is known for.

If you haven’t seen them already… Where have you been? The Yeezy Foam Runner “Sand” was released at the end of March this year.

Yeezy Sneakers for All?

Whether you’re looking for a boot, slide, or shoe, the 2021 Yeezy sneakers release will have you and your wardrobe sorted. This year is all about monochromatic tones, limited public releases, and lots of weird and wacky shapes to keep you on your toes. It seems Kanye’s living up to his promise of Yeezys for all.

Head back to our blog to read more articles on fashion trends and news.