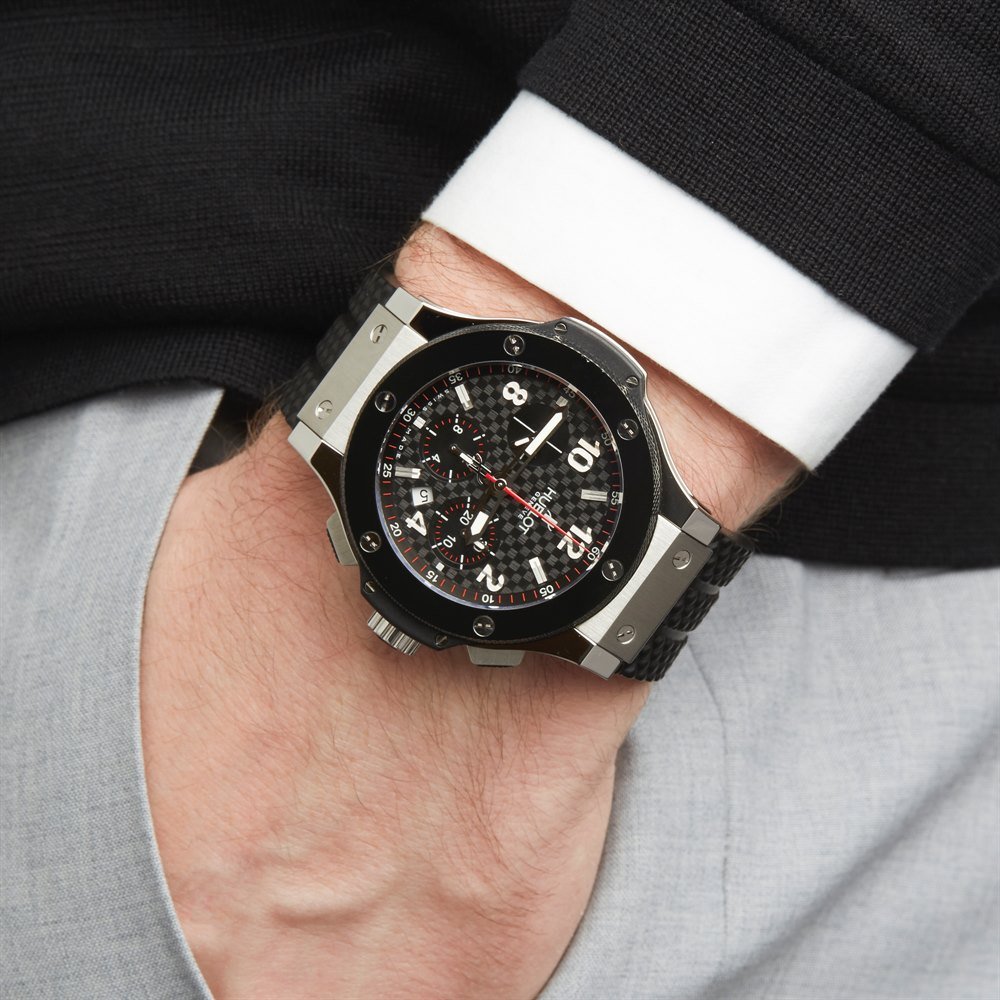 The King Power Collection, which debuted in 2009 and was based on the brand’s basic concept of fusion, assisted Hublot in strengthening its position as a high-end manufacturer of luxury sports watches. This eye-catching line features a diverse range of robust sport watches with 48mm cases, screwed bezels with rubber inserts, deep, multi-leveled dials, and a harmonious fusion of different materials.

There are several impressive models dedicated to top football clubs such as Manchester United, Bayern Munich, and Juventus of Turin, as well as NBA club Miami HEAT and true sports legends such as Usain Bolt, Dwyane Wade, and Diego Maradona. The fusion of different materials gained a new dimension with a bold sporty design and powerful construction. Here is a selection of the most gorgeous Hublot watch from the King Power Collection.

A gorgeous Hublot Watch from the King Power Collection is the Hublot King Power 692 Bang Watch. The King Power 692 Bang Watch pays tribute to The City That Never Sleeps, which is the only place where it can be acquired. Despite the watch’s predominantly black design, it also features numerous yellow accents in the same shade as New York’s well-known taxis. The model’s black components include its micro-blasted ceramic case (which has the series’ standard large diameter of 48 mm), a bezel secured with six titanium screws, the crown made of the same material as the bezel, and with a rubber insert, and the dial. The multi-layered dial, on the other hand, has a lot of yellow accents.

All of those are visible on the flange (the hour, minute/second, and second fragment markers are all yellow), and on the skeletonized central hands and pointers on its sub-dials. Two replaceable wristlets made of Hornback crocodile and rubber are included with the wristwatch. It portrays the façade of the historic building, which houses Hublot’s New York boutique and was designed by renowned architect Peter Marino. It has a sapphire crystal with an anti-reflective coating and is powered by an automatic mechanical Chrono caliber with a 42-hour power reserve.

The King Power Guga Bang Chronograph was created to commemorate the company’s partnership with tennis legend Gustavo Guga Kuerten. It has a titanium case with a satin finish and a robust diameter of 48 mm. It has a round carbon fiber bezel that is secured with six titanium screws. The renowned King Power case is distinguished by lugs and lateral inserts made of black composite resin, as well as the prominent crown and Chrono pushers made of titanium and covered with black rubber inserts. A matte black dial with applied rhodium hour markers covered in white SuperLuminova and rhodium-plated hands. It is inscribed with Guga’s signature on sapphire crystal glass in a yellow color reminiscent of a tennis ball.

In addition, there is a yellow tennis ball sticker at the 30-minute counter, which is located at 3 o’clock. The 12-hour counter is located at 6 o’clock, and the small-seconds subdial is located at 9 o’clock. The small date aperture is situated between 4 and 5 o’clock. This unique dial pairs well with a black rubber strap with white embroidery in the shape of a tennis net and yellow stitching on the sides.

Hublot collaborated with La Vecchia Signora, or “The Old Lady,” as Turin’s famous club is known among Italian fans, to create a spectacular football version of the King Power watch. The “football editions” feature a HUB4245 skeleton chronograph self-winding movement with a pretty cool 45-minute’ counter that tracks the half-time of the football game. The mechanism, visible through the center of the open-worked dial, has been customized to match the aesthetics of the watch, with a black galvanic coating and a tungsten carbide heavy metal segment. The in-house movement has 249 parts (including 28 jewels), oscillates at 28,800 vibrations per hour, and has a power reserve of 42 hours.

A sapphire crystal dial with black and white track transfers at 45-minute and 60-minute intervals. The shorter of the two central Chrono hands represents a 45-minute interval, while the longer hand displays seconds. The 60-minute counter is located at 9 o’clock, while the Juventus crest is located at 3 o’clock. The diameter of a bold-looking carbon fiber case is 48 mm. It has a bezel made of the same material that is held in place by 6 black PVD titanium screws. The lugs and lateral inserts are black composite resin, while the two pushbuttons and crowns are black PVD titanium. The chronograph push-pieces are formed in white and black rubber, while the crown is wrapped with black rubber.